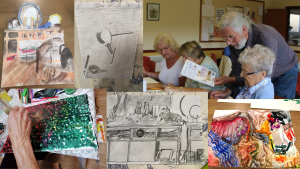 National Day of the Arts in Care Homes

National Day of the Arts in Care Homes takes place on the 24th September and this year’s theme is ‘Creative Communities.’ Roy Collins, an artist and former art teacher who now lives at Heanton Nursing Home has spent years brushing, sculpting and carving innovation across North Devon.

While his creativity has been a beauty to behold for many, perhaps his greatest contribution to the arts has been those who he has inspired and taught, as an educator.

Roy’s own personal artistic journey started at the Kingston School of Art during the late 1960s. His daughter Liberty, who has also followed a path in the creative industries as a filmmaker explains that she thinks it was the opportunity to envelop himself in popular culture that led to his interest in the arts.

“Exploring the artistic side of life was the lifestyle in the late 1960s. The music, the freedom, the clothes and the ‘scene’!” She said.

North Devon has been Roy’s home for 25 years, but born in Dartford, he has also lived in Cornwall, India and London. It was while living in the capital that Roy found love in 1984 with Liberty’s mother Gill. They lived together for some time in the cultural hub of Angel, Islington and then the East End with young Liberty.

Roy is a skilled carpenter who has a love of working with wood. While living in London, Roy devised, made and built a wide range of wooden toys and structures for local schools.

Liberty details the wide variety of carpentry Roy was responsible for across the city. “Specialist wooden toys for disabled children, stage sets for the Chicken Shed Theatre Company, bespoke cabinets, kitchens and all manner of other beautifully made items over the years.”

Journey of Inspiration in North Devon

Having moved from the capital and now residing in North Devon, Roy began teaching in 1996 at the innovative, ‘Small School.’ It was a secondary school in Hartland, Devon that had forged a ground-breaking alternative model of education. Teaching pupils aged 11-16, Roy aided his pupil’s artistic development and supported them to achieving GCSE qualifications until his retirement a few years ago. 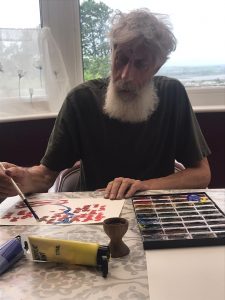 Heanton welcomed Roy into the family in June and he has continued to create colourful and innovative pieces inspired by his surroundings. Now living with a dementia, Roy’s art has evolved and has offered a therapeutic outlet for him, his daughter Liberty has observed.

“Throughout Roy’s journey with dementia, art has played an important role. It has acted as a therapeutic release from frustrations he might not be able to verbalise, as a calming activity and as a creative outlet for inspiration.”

“In the last 6 months he has produced abstract watercolour paintings of lines and forms that appear like the cliffs of Hartland Quay, still life drawings of the lounge details at Heanton, colourful graffiti-like text-based work and much more. It is something he returns to again and again; it is a very deeply rooted way of ‘being’ for him and the carers do a wonderful job of supporting him,” she said.

When Roy moved into Heanton Nursing Home, near Braunton, Liberty started a Facebook group to keep Roy’s friends updated on how he was getting on and kept in touch with his former school reunion group. The Home regularly send Roy’s latest artistic work to Liberty for her to share with friends and family. Some of Roy’s former aspiring art students are only too thankful for the guidance and wisdoms passed on during his teachings. 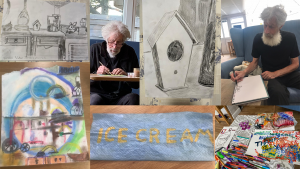 Rowan Straton, a former student at ‘The Small School’ described Roy as ‘the most incredible influence and was the best teacher/friend I have ever made.”

Liberty believes there are many contributing factors to why Roy has proven such an inspiring figure to lots of whom was under his tutelage.

“Many students, whatever their age, come to Art classes with a feeling of, ‘I’m no good at art,’ or ‘I can’t do it’. As a teacher Roy brought a calm and steady presence and encouraged all students to find their own unique path and confidence in their artistic lives. Perhaps it was his time living and studying with Tibetan Buddhist monks in northern India, perhaps it was his laid back personality and acceptance of others without judgement, but his students – whatever their age – have always been motivated by his approach to try new things, and find what felt right to them to pursue.” Liberty said.

One thing is for certain and that is that Roy has inspired and influenced many, contributing in abundance to North Devon’s creative community.