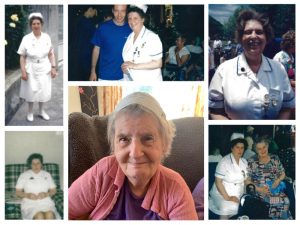 Maureen Marsh or Mo is a former nurse who used to call Heanton Nursing Home her place of work, now it is a place that she calls home.

Since moving into the home in the autumn of 2016, Mo, has not lost her caring nature and passion for nursing. Mo is respectfully known as Matron at Heanton, offering her help and support to team members, as they have been supporting her. Often found note taking or authorising the home manager Paula to sign off payroll, Mo is certainly a charismatic figure within the Heanton family. So, despite having been in retirement for many years, Mo is still very much the ruling Matron at Heanton!

Her life journey began in wartime Britain, while bombs were raining terror from above. Maureen Marsh was born on the 20th June 1940 at her father’s RAF base in Norfolk during an air raid. Her father was a ‘flight rigger’ maintaining fighter planes such as spitfires and hurricanes. Her father’s role within the RAF meant he was regularly moving from base to base, and in 1942 he was commissioned to work in India. Working there until the end of the war in 1945, Maureen was raised by her mother in the UK, who would nurse part time wherever they were posted.

Mo’s first experience of nursing was at the St. John’s ambulance that she attended at a young age, where she learnt first aid and basic nursing skills. Even at such a tender age it was noted amongst staff that she was at ease with people who were unwell. “I think this may have been her first inspiration to follow a path in nursing,” her son Stuart recognizes of this period in her life.

Stuart was the first of Maureen’s children, Mo having married in 1958, Stuart was born in 1960 and was followed by his sister Caroline in 1965. While Mo never trained as a nurse, she had a wealth of experience in different care settings. Starting in Barnardo’s children’s home, then working in a nursing home in Bridge, Kent before moving to a large psychiatric hospital as a nursing assistant spanning across multiple wards.

Mo married again in 1976 to Terry, moving to Devon. She began working in the since closed Burrow House in Ilfracombe before working at a nursing home with beautiful large gardens and panoramic views, somewhere she would later call home; Heanton.

Mo’s caring and nursing exploits took her to Lourdes, France, where over the course of 25 years she would volunteer to help the sick and terminally ill on various pilgrimages. “Many hard hours on duty, with no sleep,” Stuart adds, something many of us might consider a suffering. But Mo enjoyed her time at Lourdes and this amazing life experience enabled her to combine her religious practices and occupation. An account of this is proudly positioned outside her room at Heanton for all who are there to see.

A few years on and retirement has not quelled Mo’s appetite for taking care of those in need. Now living with a dementia, Heanton Nursing Home’s focus on life history and the importance of incorporating that into the care provided enables Mo to continue to live with purpose, attachment and belonging. Being involved in this meaningful occupation has given Mo a new lease of life.

Although never qualified as a nurse, there is no doubt that throughout Mo’s life her dedication to taking care of those in need always was above and beyond a form of income for her. For Mo, as with so many within the health and social care sector, it is a way of life that continues to dedicate herself to. The team at Heanton enable Mo to continue living her best life highlighting the power of occupational history and life identity in dementia care.

“Nurse is just another word to describe a strong person enough to tolerate anything and soft enough to understand anyone,” Mo’s son Stuart said of nursing. There is no doubt this is a fitting description for Mo as she continues to care, love and embrace anyone who she feels needs her support at Heanton.

You can also read more news and blogs.